It was almost my birthday today, so we ate lunch at the Three Horseshoes in Madingley, which just gets better and better. What I liked best this time was a lemon sorbet which tasted of all the different smells that lemons have, and not just sharpness and syrup.

On the way home, drove over the downs around Elmdon, hoping to see deer. There were none, but instead two hares in a field, whom I failed to photograph, a very idle kestrel which could scarcely be bothered to move as the car approached him, and — liveliest of all — a rat foraging on the verge of the road above Littlebury, with a bright green-golden tinge to his fur in the sunlight. He ran back to the hedge as the car approached, and then turned to watch us when we stopped and cocked his head on one side and showed his teeth at the intruder. No pictures of him, either, but here’s the more romantic predator. 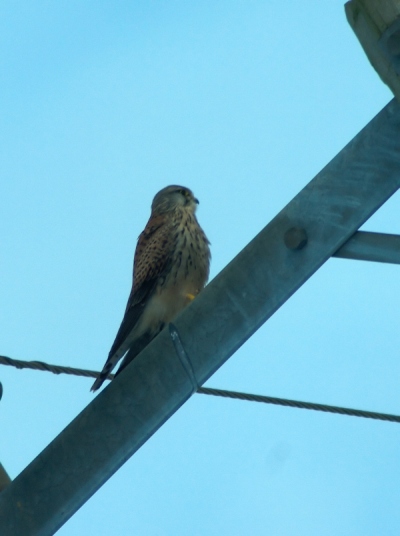 Kestrel on a telephone pole

This entry was posted in Blather, Pictures. Bookmark the permalink.