What I should be doing

is investigating a story that Louise sent me about the International Society of Arctic Char fanatics, and their struggles against some horrible development in Scotland. Better yet, I could be fishing for char (röding) because despite living for years in the southern reaches of countries where they are found I have only ever caught one in my whole life, and that was in Lake Bohinj, in Slovenia, where I didn’t know they existed until one grabbed my fly.

Instead, though, the bits of the next two months that aren’t spent doing journalism will be taken up with reading. I am a judge this year for the Bernard Shaw prize for translation out of Swedish to English, and they have just sent me the entries: 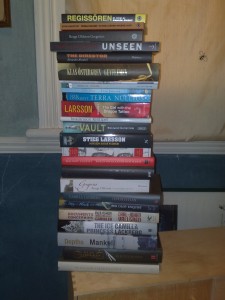 Apologies for grotty cameraphone picture: never mind the quality, marvel at the height.

This entry was posted in Blather, Literature, Sweden, Trouty things. Bookmark the permalink.

3 Responses to What I should be doing